This was my post-Thanksgiving outfit and I know I’ve got an epic faux food baby going on in it. 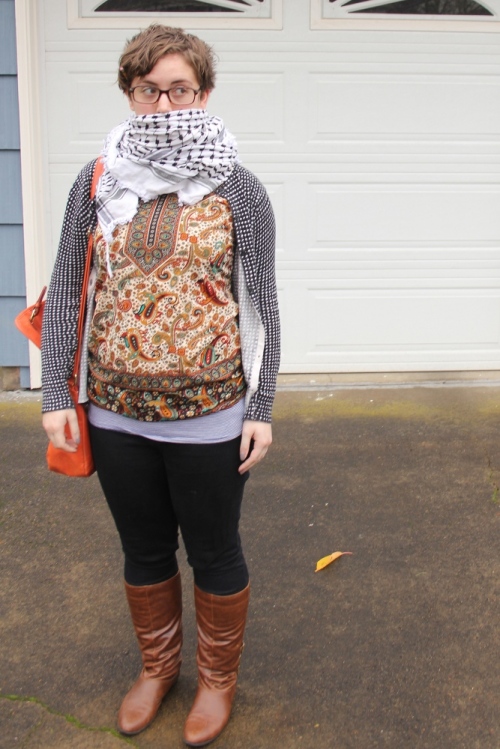 It’s a faux food baby because it’s really just how I’m standing. And I’m only standing that way to keep my mouth tucked in my scarf. Also, it’s not actually that cold out in these photos. I have my scarf over my face because I’ve got a cold sore and I don’t care how much body acceptance I’m supposed to have–that is just not a photo I want on the internet. So you guys get these somewhat goofy photos instead. 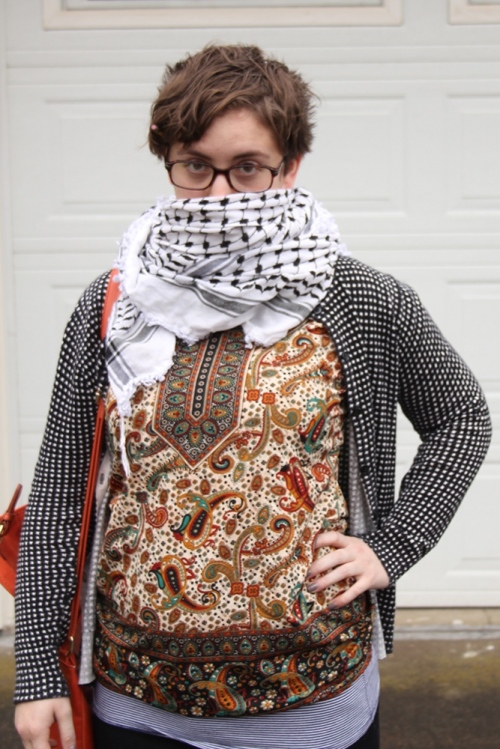 On a side note, though, I love how crazy wild and mess my hair is in these photos. It’s growing out kind of crazy and I’m trying to trim it the best I can. Right now it’s in a weird faux-Kate Gosselin the early years phase. Which I did. It’s really similar to how I had it in high school. 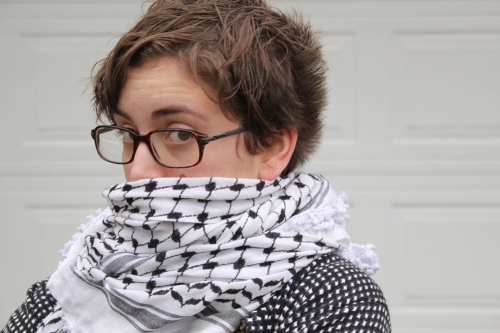 Also, and entirely separate side note, these are the last photos with my favorite, beloved hipster glasses. They were tragically destroyed in a really frustrating accident that makes me grumpy just thinking about it. We’re talking full-on annihilation. >.< So long, hipster frames, and hello new pair that I’ve had as back up and now like a lot.

My mom asked if I wanted to tag along to a quilt show she was volunteering at with her guild, and I said sure why not. It was a ton of fun and filled with very sweet women. I also had some time to carve away and get some writing done, although never as much as I want. Figuring out what to wear to a quilt show was probably more thought out and fun than it should have been, but I had just gone shopping and wanted to incorporate new things. And if you don’t understand the sentiment behind that last sentence, I don’t think we can be friends. Sorry. 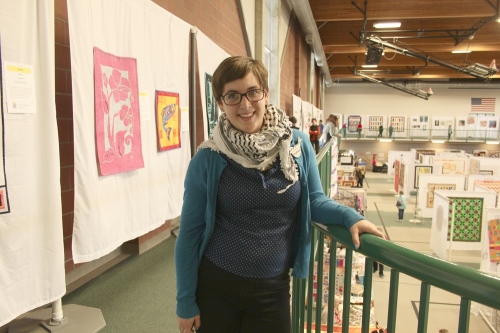 The exciting new article I added to my wardrobe was a pair of black skinny jeans. It’s almost embarrassing how long I’ve been jonesing for a pair, but I wanted to exercise self control. I wanted to hold back a little bit. That lasted a couple of months, and then I decided the best way to celebrate the news that I had a new job was buying a pair of pants to wear to said job. So that happened. 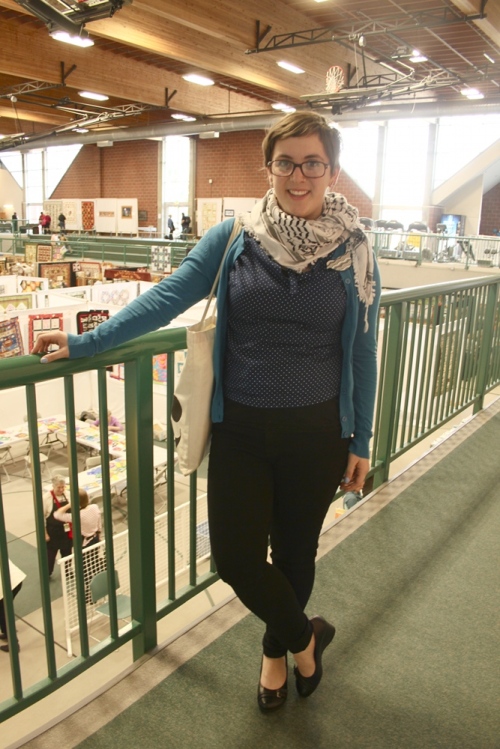 I figured dressing for a day around incredibly creative quilters meant I should throw on some handmade stuff. The pin I made a while back, and the shirt I thrifted–although it’s very clear from the construction that it was handmade. The sweater, jeans and shoes are new. And PS feel free to notice that those shoes are wedges, and that I spent the whole day parading around and letting the world think I’m a whopping two inches taller than I actually am. 5’5″ impersonating, here I come!

Okay so as you’re reading this, just know that I’m probably at my first day of work. Unless you’re like me, and you let the posts in your google reader stack up until you’re hopelessly behind and finding out what people did two months ago. In which case, welcome to 2013! Let’s hope the world didn’t end after all, eh? Made it past December 21st, did we? Woot!

Sequins: Dress Your Best, Except When You Don’t

There are a few Bigger Name Bloggers who get teased on the Blogger Hate Sites (that I never ever ever read) for using that phrase. It’s the only phrase I could think of though, when posting a super casual outfit on this blog. I know I dress up a lot for the fashion shoots, and Stripes will confirm–it isn’t because I know I’ll have a camera poised on me. It’s just how I dress. Casual, unless it’s a funky shorts-and-tights combo, is pretty rare in my world. 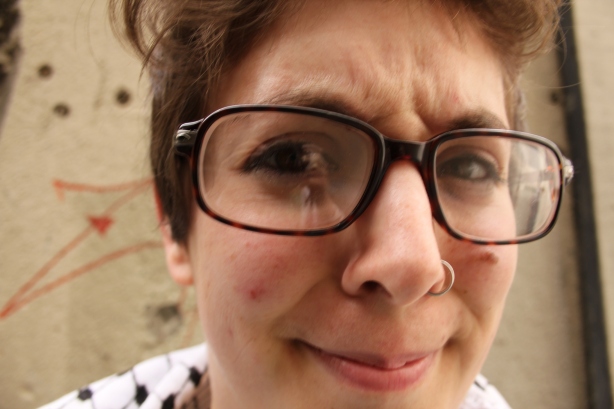 You would make this face too, if someone had a camera that close to it

Not non-existent, though! As Stripes mentioned, we were both in Seattle this past weekend. I did the amazing accomplishment of only packing two tops, a pair of shorts, tights, and jeans. It was amazing. I never pack that lightly, or with that much denim. And now I know why… I was so sick of everything before the first day was over! My sister wanted to go to the mall to look at this great store for wedding jewelery, and across the aisle (row? walkway? I almost wrote street…) was a fun store with cute jewelry and sassy shirts. Which is how I ended up wearing this great combination of clothing… 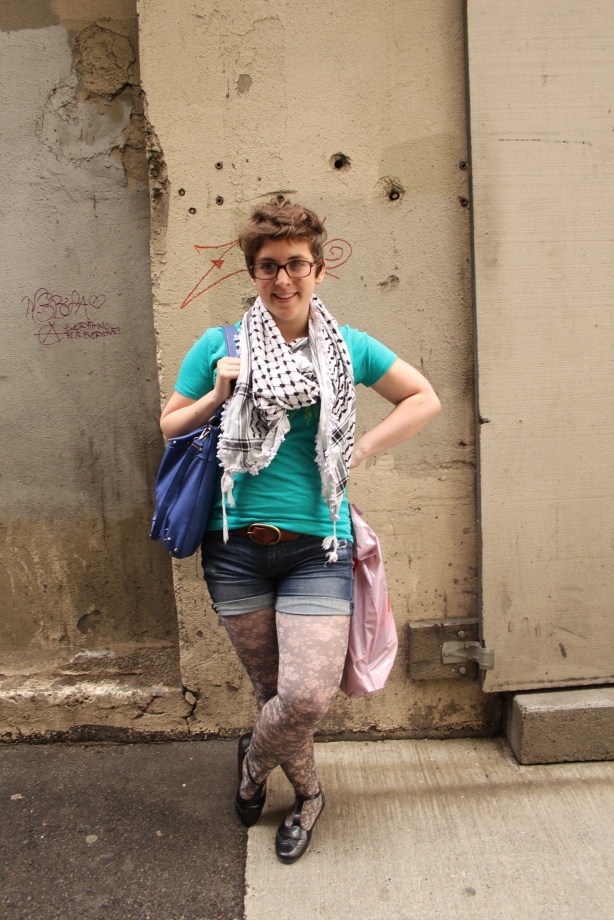 I never dress this way. Except when, apparently, I do! I love this shirt, though. You can’t see the close up (yet) but it has a shallow v-neck. It is amazingly soft. It has a lime-green print of a long horn. I’m not sure what more I can ask for in a shirt, and have said requests be within legal parameters. I also had a fun time shopping with Stripes. We’ve both got some sad unfortunate drama in our backburners, so it was equally nice to 1) have someone tell me I looked amazing in what I tried on and 2) have someone mope for a couple minutes afterwards over iced coffee. That’s what best friends are for. 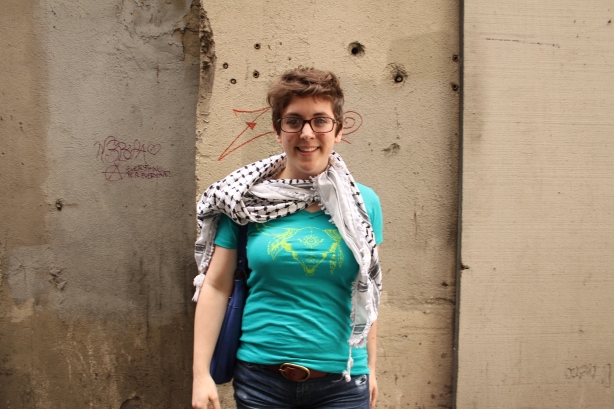 Man I miss the city. One day I’ll convince Monsieur that cities aren’t the devil’s playground (just talking about the possibility of moving to Portland makes him break out in hives). Then I shall rule the world. 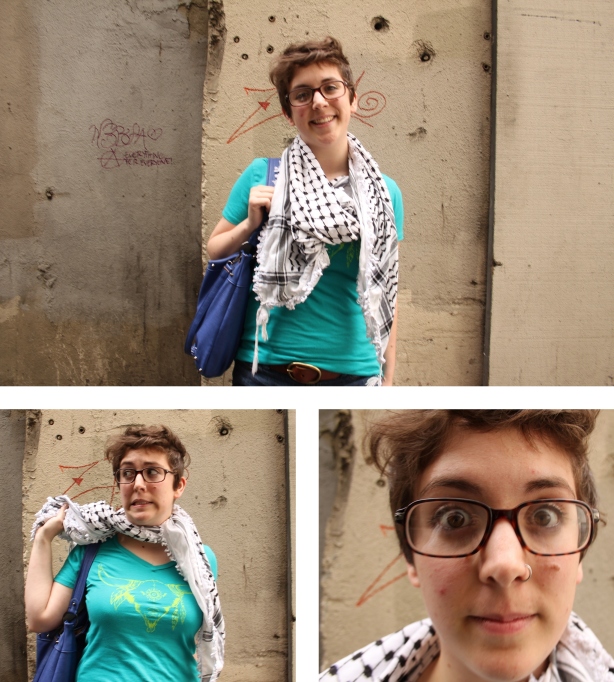 Also, this isn’t like an official contest, but if someone has the ability to turn that bottom right photo of my wide-eyed face in a giff that blinks very rarely, I might have a trinket with your name on it. Because that would be hilarious. Also because I’m pretty sure that photo has already blinked twice while I’ve been typing this.

I used vacation time to tack on an extra hour to my lunch so I could attend a lecture on our local college campus. It was nice to be back on my old stomping grounds, and especially nice to listen to a really interesting presentation about a grass roots peace-building initiative amongst Palestinian & Israel’s youth musicians. Very inspiring.

It helped that while she was very upfront about the conflicts between Palestinians and Israelis, she was also upfront about her focus for her presentation. She highlighted the legal aspects of an occupation, as well as the legal obligations of occupiers, without pointing any emotional blame (which I found very impressive–mostly because it’s not something I could do myself). She presented the music program not as a program that will fix things, or solve all the problems, or, really, any of the problems. Rather, she said that the program would lay the road to peaceful relations between individuals once the rest of it fell into place.

I went up to her afterwards and thanked her for her beautiful presentation, and told her how much I enjoyed it. She smiled, thanked me for my words, and wished me luck on my studies. 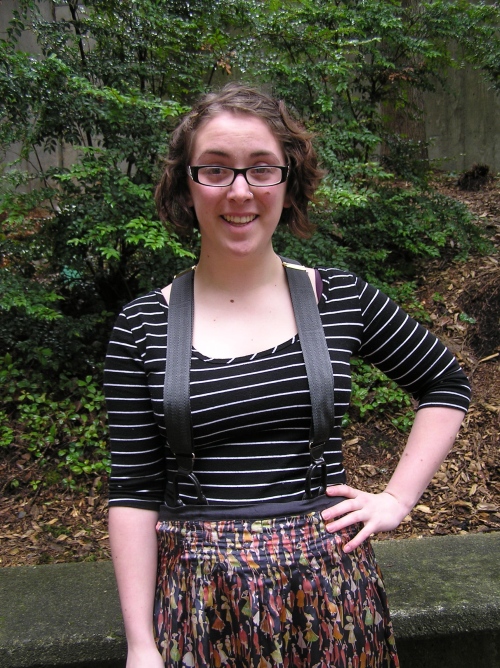 …Because instead of the mid-twenties professional that I am, I still look like a college kid. Ah well!

END_OF_DOCUMENT_TOKEN_TO_BE_REPLACED

There are a few really basic, essential pieces of my character–the qualities that I value above all others, and this outfit manages to highlight a few of them. My politics and political beliefs, my commitment to myself to be myself, and (of course) books. 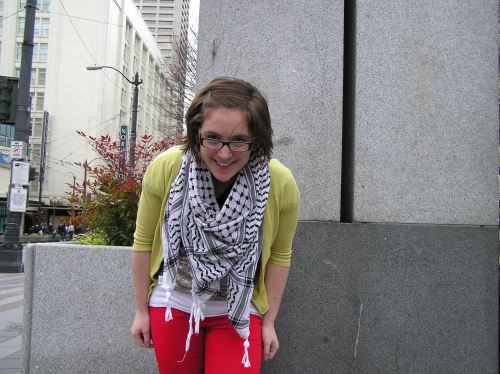 I spent last weekend in the nearby big city, visiting family and my best friend from high school. She is a pretty passionate activist, and is one of the smartest people I know. She keeps me sharp, and I love every chance I get to have conversations with her. We don’t see each other a whole lot right now (living an hour and a half apart, and both busy with full time jobs), but when we do, everything is gravy.

We talk a lot about politics when we get together, even though we have fairly different viewpoints. While our methods may vary, we do agree strongly on some things–including some stances on Middle Eastern politics, specifically the occupation of Palestine. The scarf I’m wearing, a keffiyeh, is a sign of solidarity and support for their struggle.

The rest of this outfit–the sequined top, the red pants, the lime sweater–it’s all a part of my commitment to be myself. Particularly in the way I dress. I used to be afraid to do anything that involves standing out too drastically. It’s not always easy, and a lot of the time I feel exposed, or strangely on exhibit. But it’s worth it. It’s important to be true to yourself. 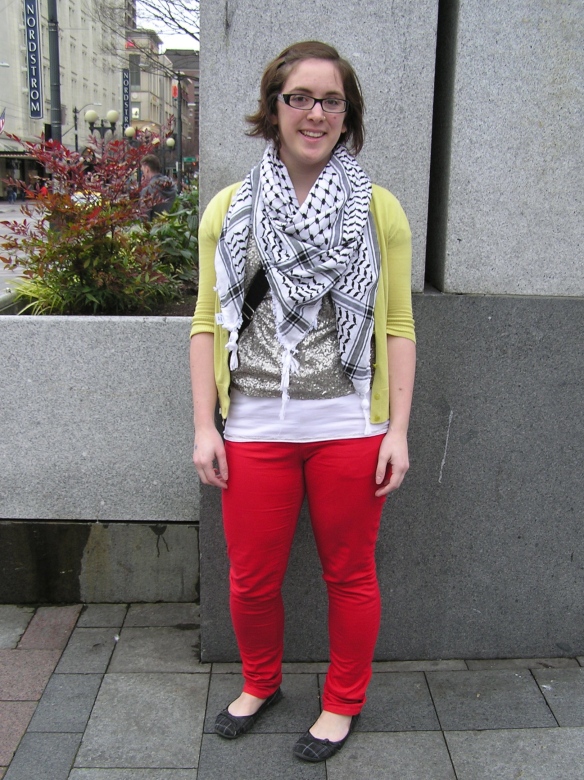 Oh and the third important quality, books? Well they’re in my bag, of which you can see the strap underneath my keffiyeh, of course!