And what does that mean?! Pumpkin patches! Corn Mazes! Adventures! Kettle Corn! Hot apple cider! EXCITEMENT!!! Yes, there are a lot of adventures to be had in this season and this last weekend a couple friends and I set out to make all our autumn dreams come true.

The first stop on our outing was the huge pumpkin fields. I’m not kidding, friends, this was one of the biggest pumpkin patches I’ve ever been to- we’re talking different sections or “Pumpkin Lands” as I started to mentally call them as we explored deeper into the land of the gourds, several breeds (I’m sure that’s not the correct word…but it’s my post so I can call pumpkins whatever I want) of pumpkins, and a couple acres of well fertilized-ok, let’s be real-smelly land. After trudging through a ton of mud (and artfully avoiding the gaggles of excited small children), I found the pumpkin. And this folks, is me and my pumpkin.

And THIS is Harry Pumpkin…yeah I don’t know but he was located next to a miniature horse. 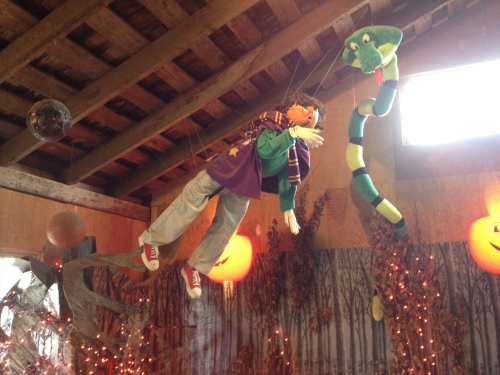 We also completed the “challenging loop” of the Alice in Wonderland corn maze. I have to say the big lesson we learned on this trip is when a maze says loop, it means you’re going to end up right back where you started no matter how much you try. We walked down almost every off shoot of the challenge side only to realize the exit was through the simple path. But, hey, we had a blast and took some silly, Alice themed pictures along the way!

We met the White Rabbit on the way in-down the rabbit hole we goooo!

The signage was awesome (and led to some interesting arguments about which direction we were heading? “I said here!” “But I think we should go there” “This sign says yonder…should we go yonder?”).

Our very own Mad Hatter found the real Mad Hatter…it was a VERY exciting reunion!

And I had some tea with Alice.

As far as pumpkin patch fashion goes, however, this was a very utilitarian day. Dark colors so it wouldn’t stain from the dirt, old running shoes that wouldn’t be out of commission because of some mud, and comfy pants I could run around in. Not my most fashionable outfit, but it definitely served it’s purpose.

Tune in on Sunday for the carving of my pumpkin friend!

Two really awesome people are getting married today. It’s exciting, and it’s also the first wedding of the season (that I get to attend). I’m really happy for them, and while I could turn this post into a platform for my beliefs on equality and what I think is right, I think I’ll just settle with a heartfelt congratulations. This couple is adorable, and I’ve known one of them ever since I started college. I wish them the best of luck and hope all the happiness for them.

For those curious, Monsieur and I went as a Katamari Ball and the Prince, while the other couple went as Miss Piggy and Miss Piggy’s Doting Boyfriend. And let me tell you, of all the men (and women) I know, none pull off a Miss Piggy as well as that guy. Oh and also, Monsieur is notorious for always making the wrong face at a camera. In case you were wondering.